Here's a look at the closet from my daughter's old bedroom. We added that window and then, ripped out everything else. This space will basically be converted into the new water closet. We extended the house behind those shelves--and that's where the shower/tub area will be. To the left of this closet was the old laundry area. This has become the new kid's bathroom. We had planned to create a new floor out of polished concrete, but as luck would have it, we had some extra terra cotta pavers left over from the kitchen and sunroom tiling. We even eked out a few more for the water closet. It's a more grownup look for a kids' bathroom, but we'll keep the elements organic with white plaster and rustic, earthy materials, which also means indestructible. With our swimming pool, we tend to have a lot of play dates at our house and that means a lot of wet towels, feet and bathing suits. So, our kids' bathroom has to be tough. In fact, our backyard pool and jacuzzi played a large part in how we designed this bathroom. It's right off the back steps to allow traffic straight from the jacuzzi to the bathroom (and vice versa). We also needed ample space for this bathroom because it's essentially a bathroom inside of a bathroom and will be used by multiple kids at one time. So for us, the toilet area had to be private so that the rest of the bathroom could be used or left open as a thoroughfare to the rest of the house. The shower/concrete bath tub area, which has a partial wall, is also private with hooks inside for a robe. We also opted for a towel warmer because we use our jacuzzi year-round and a warm towel is the only way to muster the courage to get out of the jacuzzi on cold winter nights!

In order to finalize our design for the kids' bathroom, I looked at quite a few bathroom images on line. Here are a few pics from my inspiration file. I found that I kept returning to earthy clean bathrooms with elements of concrete, stone, wood and plaster. 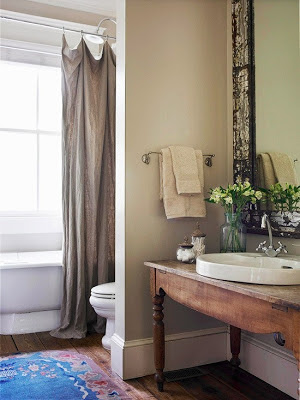 I love the look of the wood vanity here with the porcelain vessel sink. So pretty. Vessel sinks do have their drawbacks though. Not as easy to clean as the undermount sinks. And they seem to take up more counter space. 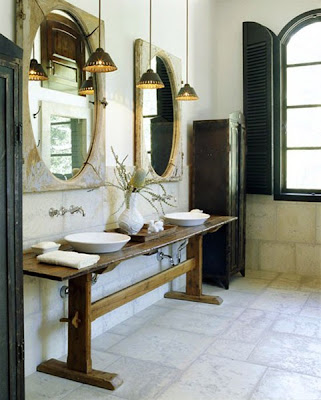 This is a great bathroom. Again, a nice combo of vessel sinks with a wooden vanity that looks to be a refurbished table. This gave me the idea to split our farmhouse table in half and use it as our vanity. (The other half will become the desk top for my daughter's new room.) I would have loved to keep this farmhouse table for our dining room, but it's long and rectangular and would compete with the wood island of the same size. Too much bulky furniture filling up our open floor plan. 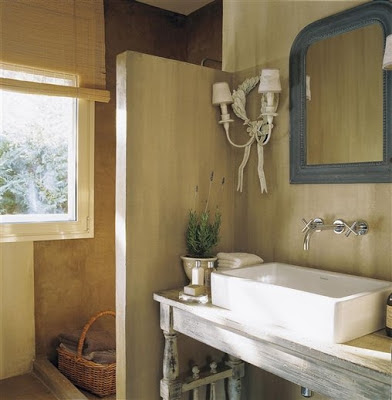 Another nice wooden vanity. This time with a rectangular sink. I also like the wall mounted fixtures. 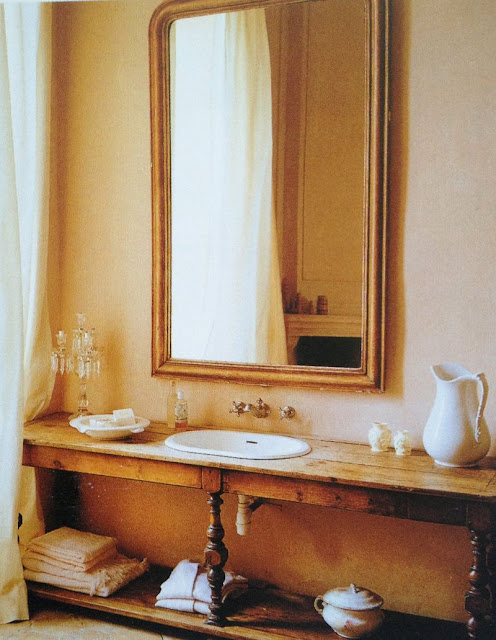 I'm Floored: The Terra Cotta Tiles Are Going In!

Pools of Reflection: An Essay on Patience (Sort of) 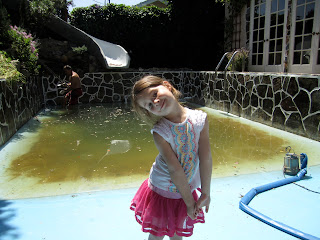 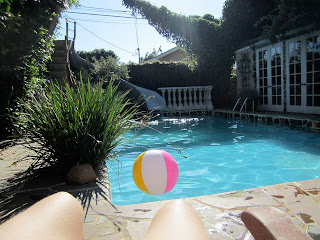 More Before and After on the Pool and Backyard: A Reminder That Mess Eventually Equals Progress 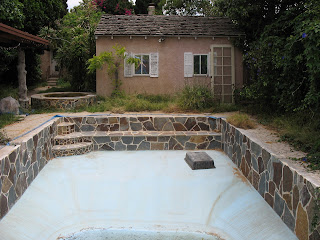 Before and After on the Pool

Beth
Los Angeles, West Coast, United States
I’m editorial director at Basic Media (a custom magazine publishing company) and Basic Health Publications (our book publishing division). I started this personal blog to update my family and friends about my ongoing home renovation, but if you've landed here, please feel free to look around. Originally from Syracuse, New York, I live in West Los Angeles with my husband Milo, two kids (Zjena and Max), one dog (Loretta) and our three chickens. When I'm not renovating my house, I'm building in-door slip-and-slides or teepees out of burlap.